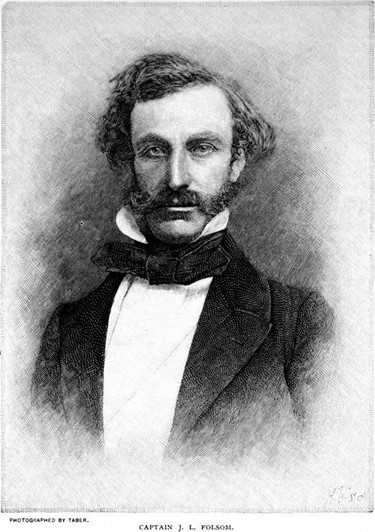 Although the city of Folsom, California, was named after Joseph Libbey Folsom, not much is known about him. Most residents assume that he came to California in the Gold Rush and was a civic leader who lived in a fancy home in the Historic District.

In fact, he was born in 1817 in Meredith, New Hampshire, and graduated from West Point in 1840 as a civil engineer. In 1846, the U.S. Congress declared war with Mexico. In May of that year, he was recruited to join the Stevenson regiment to sail to California for the purpose of wresting control of Alta California for the United States from the Mexican government. In March 1847, Folsom arrived in Yerba Buena (now San Francisco) as a U.S. Army Captain assigned as Assistant Quartermaster in charge of supplying the military presidios in Monterey and Yerba Buena.

When the war with Mexico ended on February 2, 1848, Folsom stayed at his post. It would be several months before news spread that gold had been discovered on January 24, 1848, in the foothills to the east, opening the region to a sudden rush of gold seekers from around the world, and changing the direction of Folsom’s life.

He became a prominent citizen of San Francisco, and a builder of that city. He acquired a 36,000-acre land grant given by Mexican Governor Alvarado to another prominent San Franciscan, William Leidesdorff, after Leidesdorff’s death. The land was near the site of the original gold discovery, and Folsom was accused of duplicity in the purchase of the grant. Given his experience and vision, he may have been more interested in protecting the land on which he intended to join in the venture to build the first commercial railroad west of the Rocky Mountains.

The Sacramento Valley Railroad was formed in 1850, and Folsom became the second president. SVRR hired Theodore Judah to survey a railroad line from Sacramento 22 miles east to a site for a town where a mining camp called Negro Bar had been. Folsom named his future town Granite City. From there, stages and wagons could deliver people and goods to the mining towns cropping up in northern California and Nevada. Folsom hired Judah to survey the site for a town.

Joseph Folsom died on July 19, 1855. He was 38 years old, and never married. On December 27, 1855, Judah filed the Folsom town plat in the Sacramento County Recorder’s Office. On February 24, 1856, the Sacramento Valley Railroad made its first run to Folsom carrying a contingent of notables from the capital. The city and the railroad flourished until the mid-1860s. Joseph Folsom never had a chance to live in the city he founded. It’s fascinating to think what the city would have been like if he had.

This portrait of Joseph Libby Folsom based on a photograph by Tabor that appeared in The Century Illustrated Magazine in February 1892.